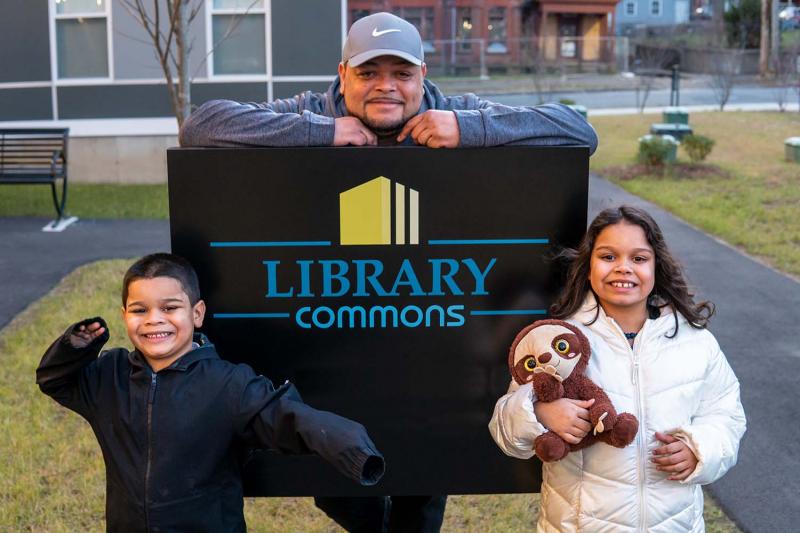 Orlando Rivera has a way with words. You may have heard him at the Library Commons ribbon cutting ceremony in Holyoke on October 22, 2021. In giving voice to how it feels to call Way Finders’ newest affordable property home, Orlando described his experience as a single father of two spirited young children: Struggling to secure a home. Enduring a pandemic. Facing upheavals to daily life—the closing of schools, the loss of after-school care. Playing board game upon board game, building fort after fort.

But the message that resonated most clearly? Orlando’s sheer joy of having a safe, healthy space to call home—complete with a bedroom for each child, especially handy for times when the siblings quibble and scuffle. He is glad to have an elevator and onsite laundry, too, plus security cameras that discourage illicit behavior. All within walking distance of stores, a health center, the kids’ school, and other services.

Orlando moved into Library Commons on September 1, 2021, with his five-year-old son Daniel and seven-year-old daughter Genesis (“She gets to press the ‘G’ in the elevator, G is for Genesis”). They share a bright three-bedroom corner apartment. When he wakes up each morning, Orlando feels grateful—and relieved to have the time to figure out his next steps. His approach to outfitting the space is “little by little.” They all have beds; dressers are to come.

“Right now, it’s kind of tight because we’ve got their birthdays one day apart, on November 9 and 10, then we’ve got Christmas,” says Orlando, who was most recently living in a series of different shelters. A mani-pedi tops Genesis’s birthday wish list; Daniel has video games on the brain.

“Oh, I really, really liked that,” he says. “It was a different crowd and I got to see people on the other side of things. I felt like I was a part of something important. I was happy to speak.”

Orlando’s skill for oration harkens back to childhood—he’s ridden many a train with his mother, following her zealous lead in preaching to strangers about Jesus and God.

As he speaks about his life, some things are on the record, some aren’t. He has lived in Florida, Pennsylvania, New York, and central Massachusetts. There are twists and turns, losses and tragedies. There were times of big paychecks and times of eviction. There are things he wishes he had known earlier. There are mistakes made and mistakes narrowly avoided (“If I hadn’t been in another state when that happened? I probably wouldn’t even be talking to you right now”).

But through some happy coincidence of luck and triumph, he is here. Trying to be the best dad he can be to his two youngest children (he has three older children from a previous relationship). Trying to make their upcoming birthdays special. Trying to find a way forward as he navigates parenthood on his own—in a system, as he observes, more accustomed to supporting single mothers. 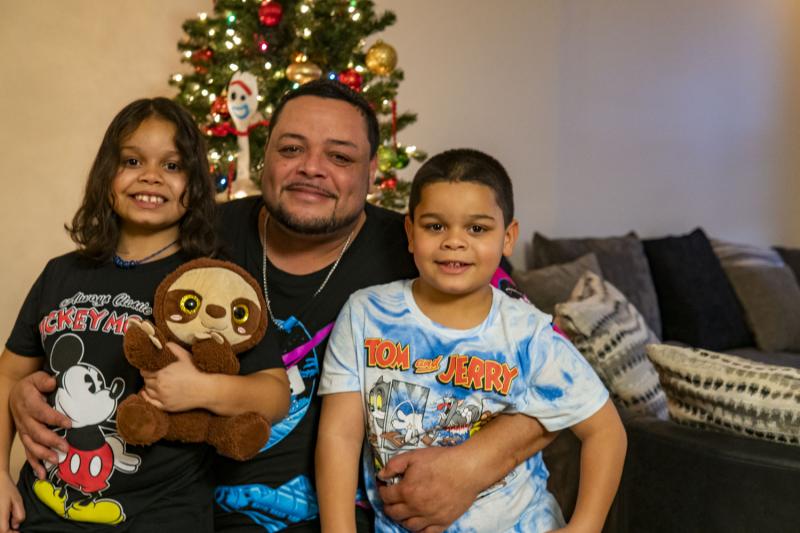 In speaking of his future, Orlando’s focus is on regaining his driver’s license and finding a job with a flexible schedule, ideally a role he could do remotely. His past work experiences, including in sewer maintenance and construction, featured early starts, long shifts, and overnight travel—none of which is compatible with the realities of raising young kids without help (“I can’t magically make a babysitter appear, right?”).

And he’s not seeking a relationship of convenience—trying to blend his family with that of a past partner didn’t work out. “All I love is my kids,” says Orlando. “If love was to strike, it would have to fall out of the sky and literally hit me.”

As Orlando is making himself at home in his new neighborhood, he has all the makings of an engaged community leader. He’s constantly looking out for the spaces and the residents of the neighborhood, picking up discarded needles (“My kids call them drug sticks, they know not to touch them”), calling out folks for unwelcome behaviors.

“When they see me coming with the kids, they cross the street because I’m very forward about it,” says Orlando, of the reputation he is establishing as a community voice and presence. “I say, ‘Get out of here and keep moving. You’re not going to sit on our benches to shoot up.’ It takes the community to let them know, ‘Yo, we ain’t having that.’”

The next time you’re walking up Chestnut or Elm streets in Holyoke, near Library Commons, keep an eye out for Orlando, and if you see him, say hello. His watchful eye—and ready voice—are determined to make his new home and community safe and welcoming for families.