Meet community leader Gerardo Torres: “We are supposed to be together, be helping each other”

Essential to the collaborative work that is community building and engagement? Vision—to see potential in residents before they see it in themselves. To see ways to build trust and distill fears. To see sparks of hope and progress. To see opportunities to forge relationships.

But no matter how much preparation goes into bringing such visions to life, as Community Engagement Coordinator Anna Cruz can attest, there comes a time when the key pieces—the venue, the speakers, the topics—are set. And there’s nothing left to do but close your eyes and let go.

“There’s a saying, ‘Toss the ball and see if somebody catches it,’” says Anna, of how it feels to kick off a new program. “The first session to me is ‘Build it or break it,’ meaning it could go very well or go very wrong. Like if we ask, ‘Are they any questions?’ and the room is silent, that’s a concern. And the first session of our Resident Leadership Program in Spanish wasn’t like that at all!” 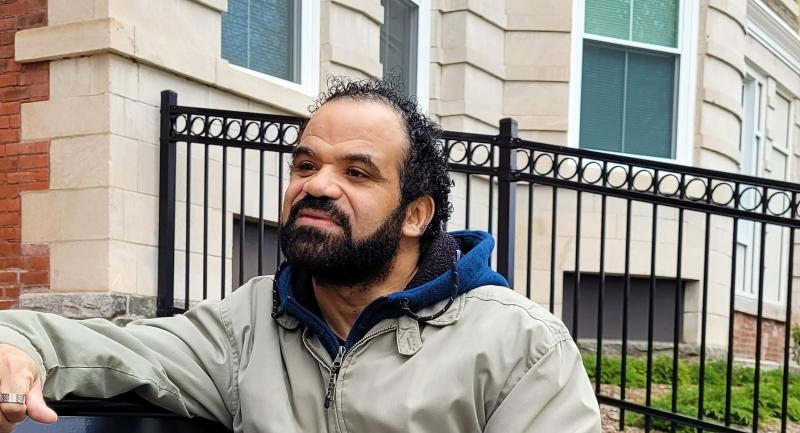 A big reason why? Community leader Gerardo Torres, who has lived in south Holyoke for the past 25 years. He came to every Wednesday evening of the program—held February 2 through March 9 and conducted for the first time ever in Spanish—poised and ready to add his voice.

Beyond helping facilitate the first session, which was on effective leadership, Gerardo took the initiative to greet the dozen plus attendees, share ideas and stories, and remind people about upcoming sessions. And in doing so, he helped set the tone: This is a space where everyone can feel welcome. Participants responded in kind—and excitement for the series grew.

“He was very confident, greeting people like he was the mayor! He took on the role of series co-facilitator, I didn’t ask him to do that,” says Anna of Gerardo, who was born in Puerto Rico and moved at age three to New Jersey with his adoptive family. “It was an aha moment. The real goal of our work is for residents to take the reins as staff take a step back. I thought, ‘I’m seeing this with Gerardo!’”

“I became a community leader in 2017,” Gerardo says, referring to the first time he completed the Way Finders’ Resident Leadership Program, which included a trip to Los Angeles to attend the NeighborWorks America Community Leadership Institute. “Holyoke is a good community, it’s one where you can know everyone, you know.”

But Gerardo’s involvement in Holyoke extends back further. He first linked up with Neighbor to Neighbor in 1996 as a volunteer—knocking on doors, helping register people to vote, joining community meetings at Lyman Terrace Apartments. He has also served as vice president of the South Holyoke Neighborhood Association.

Gerardo’s current vision for his city?

“I’d like people to have more jobs in the community. I want a clean community. And a community together—not one where everyone is separate. We are supposed to be together, you know, be helping each other.”

Whether that’s by helping residents who face issues with mice or cockroaches in their buildings or joining in neighborhood cleanups. Or responding when residents are displaced by disasters. “After a fire on Cabot Street, I was there from four o’clock in the morning until 11 or 12 at night,” Gerardo says. “We didn’t leave until they put people in hotels and the landlord responded.”

Gerardo’s brand of leadership is rooted in his calling to serve others. He’s a trusted resource to those in need, someone who listens and cares. He was also among several previous RLP participants who, in sharing feedback, expressed the wish for Way Finders to create a fully Spanish version of the program.

“For me, it was important because there are a lot of people in the community from Puerto Rico and other places who don’t understand English too well. Sometimes they are afraid to speak. It was important to offer this in Spanish so they could get involved in and learn from the community,” says Gerardo, who counts music among his top passions (“salsa, merengue, bachata, hip hop”).

“I wanted to engage these active residents as storytellers,” says Anna, who helped them see how their current activities in the community prepared them to lead. “Grisel had created a group for Latinos who take care of their loved ones with Alzheimer’s, which she was inspired to do after the program. She was a little confused about where she fit into this series. And I said, ‘That would be community organizing!’”

Gerardo spoke up without hesitation: “I remember he said, ‘Well, I’m a leader, so I can help you with effective leadership,’” Anna says. “And I was like, ‘Yes!’ It’s very rewarding when residents see what I see in them. And in Gerardo I see a driver. Tell him what you need done, and he shows up before everyone else and gets it done.”

The certificate that Gerardo received upon completing the program will soon be framed and displayed at his home. “It’s something happy, another door has opened for me,” says Gerardo, who loves walking outdoors and being in the woods. “It’s not like, ‘Oh, I took this program and now I’m going to stay home.’ It’s the opposite. I want to go out and show others that they can be leaders, too.”

To catch up with Gerardo and Anna and get involved, check out the Chestnut Community Alliance, an active coalition of Holyoke residents, community providers, and civic leaders who are working together to make their neighborhood safe and healthy.