Our place, our home: spotlight on first-time homebuyers Carlos and Sasha Nunez

“We purchased our first home in November of 2020,” says Carlos Nunez, of the 1950s home he shares with his wife Sasha and their three children. “It’s a half-acre. In Springfield, that’s big. Most people’s yards are about the size of my front yard.”

“It feels good to know that this is our place, our home,” says Sasha. “It feels like we’re investing more into our family and we can make this space our own.”

The house, framed by mature trees, sits on a quiet street. Inside, the bright spaces reverberate with energy. There are photos in the living room, a mural of the solar system in the playroom, a textured purple wall in the master bedroom (“I saw that on Pinterest!” says Sasha), and a triple bunk bed in the kids’ “sleeping room.” 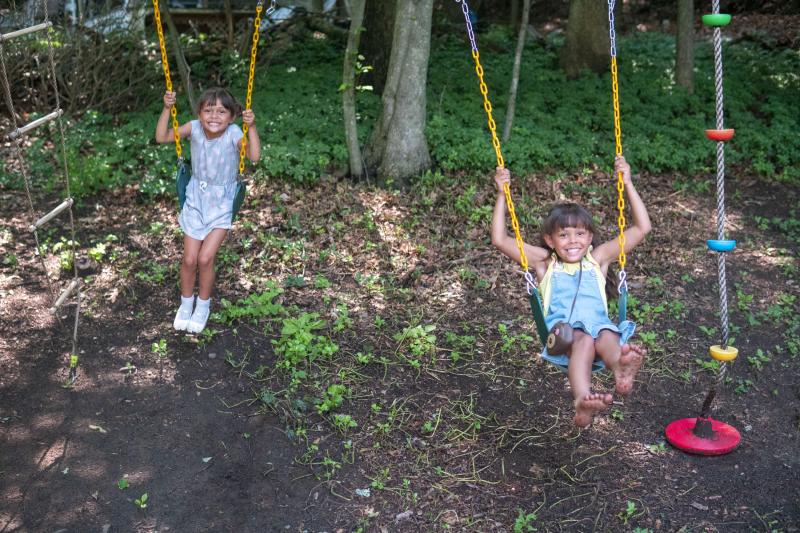 “I was excited to come live in this house,” says their daughter Avani, age 7. “There’s a lot of space to play. We have a sandbox, which Mila asked for. And for me there’s monkey bars. And there’s a baby swing.”

Carlos and Sasha, high school sweethearts, first connected with Way Finders in 2011. They rented a studio apartment at New Court Terrace in Springfield, where they met Property Manager Nilsa Cruz.

“We’ve grown up together!” Nilsa says, of their decade-long friendship. “And today they are one of my best success stories.”

While at New Court, Sasha and Carlos married, went to Springfield Technical Community College (he for engineering, she for general studies), and had their first child. They moved into a two-bedroom after they welcomed Mila, age 4. They began craving a three-bedroom after the arrival of Carlos III, age 2.

Their path to homeownership began when Nilsa referred them to the Way Finders Credit Success program, where they learned all about credit—how to establish it, maintain it, build it up.

“They taught us about methods for saving and where you need to be before buying a house,” says Sasha, who works as a care manager at Behavioral Health Network. A tip that worked for her—the more free-spirited spender of the two—was to put 10% of her pay directly into an account that is less accessible than a checking account. “Out of sight, out of mind!” she says.

After a year devoted to building credit and savings, Carlos and Sasha completed the Way Finders First-time Homebuyer Program, which they chose to do in person, in January 2020.

“Right when we started to look, the pandemic hit and it made everything so competitive,” says Carlos, who works as a school bus driver after pivoting from an engineering role that left too little time for family.

Hopes were raised, then dashed. They lost out to cash offers.

“You definitely have your ups and downs,” says Carlos. “But we always said, ‘We’re going to get the house we are meant to get.’ And that’s how we kept moving.”

As time went on—they looked March through October—interest rates dropped. Their offer—on a cozy house on a nice street—was accepted. With their first-time homebuyer certificate, they locked in an interest rate of 2.625% for 30 years. And they pay no private mortgage insurance on their Massachusetts Housing Partnership ONE Mortgage.

Of moving into their home? “Ah, man, I can breathe!” says Carlos. “Financially, it was definitely a relief because we’re paying just tiny a bit more, but we got a whole other bedroom, a whole house, a yard for the kids. We have the smallest house on an expensive block. The more work I do to it, the better it gets for us. We always wanted a forever home.”

There have been bumps along the way—termite damage to repair, a months-long wait for kitchen appliances during the pandemic—but the couple takes these in stride. As they keep their eyes on the prize. 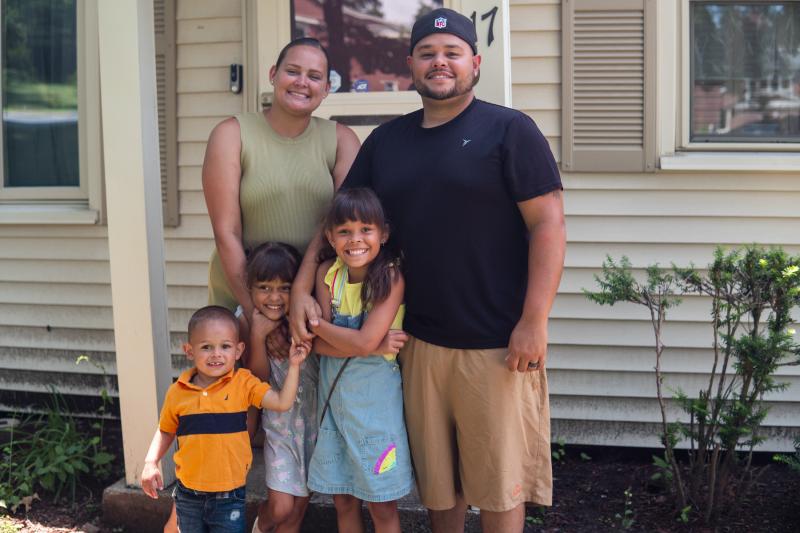 “In my family, I’m the first one to buy a house. We finally have a place to do events for family,” says Carlos, who is renovating the basement to include a home office, a gaming and entertainment spot, and a barbershop area. “I cut hair as a hobby, to help out family. And it satisfies my OCD!”

Today, the Nunez family buzzes with activity and excitement—exploring the neighborhood, hosting gatherings, diving into projects, meeting neighbors, plotting their backyard “oasis.” Their home is the hub for it all: It’s where they’ve found space to play. Space to grow. Space to dream. Space to be.

“I used to just have to pack up everything in the car and then take them to a park,” says Sasha as she watches her kids on the swing set, a smile on her face. “Here, we see everything: deer, foxes, birds, owls, toads.”

“We have it all,” says Carlos. “We’ve had a bald eagle way up top on the tallest trees there.”